Ruler of the Sakura Cosmos (Formerly)[1]

Ziggy (ジギー, Jigī?), also known as the Demon King (魔王, Maō?), is a machine of Granbell, was Shiki Granbell's surrogate grandfather, the former ruler of the Sakura Cosmos,[2] and creator of machines such as the Four Shining Stars, Four Dark Stars, and E.M. Pino. Originally the leader of the warship Edens Zero, he currently uses the ship's successor, Edens One, in order to conquer humankind. He was also Xenolith's pupil, and the King of Robots.

Ziggy has a silver face vaguely reminiscent of a skeleton. He is made completely from metal and has black, metallic pieces covering his neck and surrounding his face. He wears a gold crown with a dark purple jewel in the middle and he has large, gold horns protruding from either side of the crown. He adorns himself with a large, red cape with gold trimmings with two gold skeletons on each shoulder. This cape covers his metallic body armor which has a beast with an open mouth and silver teeth adorned on the front.[3] 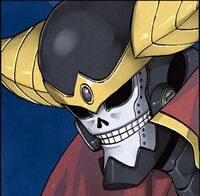 Ziggy was once a kind and caring robot, and seems to possess tremendous knowledge on a great many things, even those that lie outside the Granbell Kingdom. He seems to have deeply loved Shiki as his grandson, having brought him along with the Granbell Kingdom and teaching him everything he knew about the universe, the meaning of friendship, and how friends were the most important thing a person can have.[3] His caring nature was shown even further, as seen with him requesting the other robots to manipulate Shiki into leaving the island knowing that their batteries wouldn't last long and they would deactivate soon, leaving him all alone on the planet.[4]

After somehow revived by an unknown dark evil Ether, Ziggy turned cold and heartless, easily wanting to harm those he loved before without a second thought.[5][6][7][8] According to Xenolith, Ziggy was revealed to have fallen into the darkness of gravity.[9]

Ziggy was built along with many other robots for the Granbell Kingdom back when it had many visitors. After the park was abandoned a century ago, he and the rest of the robots were left to fend for themselves. Sometime after Granbell was abandoned, Ziggy built the Edens Zero along with a group of four female machines to bring the ship to its full power: Witch Regret, Sister Ivry, Hermit Mio, and Valkyrie Yuna, who became known as the Four Shining Stars, with the goal of finding Mother.

During his quest to find Mother, Ziggy journeyed to the Aoi Cosmos and visited the planet Red Cave. He entered the Temple of the Mother Beacon without the Four Shining Stars and managed to survive the burning cave within the temple to reach the clue to find Mother on the far side.

During his travels, Ziggy met Elsie Crimson, the future captain of a fleet of space pirates, and became her benefactor. When close to finding Mother, Ziggy discovered an orphaned boy named Shiki, which caused him to give up his search for Mother, returned to Granbell to raise Shiki as his adoptive grandson, and taught him his signature Ether Gear: Satan Gravity.[10] Sometime before he broke down, Ziggy gave the Edens Zero to Elsie and requested her to give the ship to Shiki when it was time for him to leave Granbell. Sometime later, Ziggy had built E.M. Pino and left her on Norma for unknown reasons.

One day, while Ziggy, Shiki, and Michael were watching shooting stars believed to be a Dragon, Ziggy told Shiki of the importance of finding friends and traveling the universe.[3] Eventually, his robotic body broke down and he ceased to function sometime afterward, leaving Shiki to be looked after by the Granbell robots in his stead. Distraught, Shiki tried to repair Ziggy to save him, only to learn there was nothing he could do to save his adoptive grandfather. He passed away before he could teach Shiki the Gravity Comet technique. Before he ceased to function, however, he requested the other robots make Shiki leave them behind and send him to space by whatever means necessary as he knew that his adopted grandson would be all alone on the planet once their batteries died out.[4]

Back when Shiki was a kid, Ziggy was the one who told him that robots also have similar lifespans as humans, such as both only have one soul and memory of their past life that cannot be returned, even after their mechanical bodies are revived. Ziggy’s references to Shiki eventually foreshadowing the death of Valkyrie Yuna at Sun Jewel, who was the first known robot to die in the past before Shiki’s robot friends do in the present.[11]

On the planet Granbell, Ziggy approaches Shiki and the others from behind, telling the machines of Granbell to rest in peace. Shiki and Hermit are happy to see Ziggy is alive. While Rebecca, Weisz, and Homura are confused as to how the previous Demon King is alive. Shiki then runs toward Ziggy in tears happy to see his grandpa alive. Suddenly, Ziggy then uses his Ether Gear to destroy the landscape much to Shiki and his friends' shock. Ziggy says to Shiki that he was wrong and that he never should have raised him or sent him to the skies. With a sneer, he calls humans, ugly, foolish creatures and then says that the age has come where mechanical life forms will rule over humankind as the Edens One descends from behind him.[12]

Ziggy calls out to Pino telling her that she belongs with him.[13] He tells her that she was created to follow his orders and that she has no will of her own. He tells her that if she joins him he will tell her why he made her. He then uses his Ether Gear to destroy Granbell Kingdom.[14] After Shiki helps Pino return to her senses, Ziggy tells her to stay here and rot with her humans. Ziggy then proceeds to float up toward the Edens One and board it inside. As he does so he calls Hermit telling her that he no longer needs her or other Shining Stars. He then unleashes another wave of destruction with Satan Gravity upon the surface of Granbell.[15] After cleaning himself up back to his original appearance, Ziggy tells them that the Edens Zero is a prototype for the Edens One. He then says with the One now awakened, the Zero will cease to exist.[16]

Ziggy then introduces the Crew of Edens to the Demon King's Four Dark Stars a more advanced generation of Four Shining Stars. Ziggy then says that he will leave Shiki the blessing of dying with his friends.[17] While confirming Valkyrie Yuna’s death due to Homura’s presence as her human successor, Ziggy orders a recently reluctant Connor to kill all the people on Edens Zero. Ziggy remained quiet when Connor tries to reason with him and tells the captain to sink the ship which the latter complies.[18] When the Star Bringer of the Edens One is about fire at the Edens Zero, Ziggy declares that this is destiny.[19] However, Elsie’s Skull Fairy intervenes and manages to rescue the Edens Zero on time, causing Ziggy to order Captain Connor to retreat for now and says that Edens One has no chance of emerging unscathed from fighting one of the Oración Seis Galáctica at its present stage.[20]

After arriving in the Aoi Cosmos, Ziggy hacks into the systems of Foresta and broadcasts himself to the human and machine population of the Verdant Planet. He declares that robots will rule over humans and states that he will start with Foresta, where the machines suddenly started attacking the humans and enslaving or killing them, causing a huge panic on the planet that has lasted a week.[21]

After watching Shura's public announcement across the Aoi Cosmos, Ziggy muses that it is the kind of Nero's son to react as exactly as he expected. When Wizard asks if he means about the robot massacre, the Demon King explains that if Shura wants to destroy all of the robots at once, then he has one option. He reveals the "All Link System", the last resort allowed only to the rulers of Nero 1: The Temple, and this is what he has been waiting for.[22]

Satan Gravity (サタングラビティ Satan Gurabiti): Ziggy taught Shiki his Ether Gear, Satan Gravity, which allows him to control and manipulate gravity.[23] Ziggy's mastery over this ability allows him to perform feats such as destroying an entire city around him without moving from the spot he is standing, and levitate into the air.[24] Over time Ziggy's gravity was able to destroy the surface of Granbell, completely altering its shape.[25]

Immense Heat Resistance: Ziggy's mechanical body boasts an impressive degree of resistance to heat, surpassing the bodies of the Four Shining Stars, which allowed him to traverse through the intense flames of Red Cave and return alive all by himself.[28]

Mechanical Engineering: Ziggy was shown to have a great degree in mechanical engineering, going as far as to be able to build other androids such as The Four Shining Stars, Pino and The Four Dark Stars. His skill was great enough to build a ship such as the Edens Zero and later the Edens One.[16]

Transformation: By activating his Ether and having it spread across and throughout his body, Ziggy is able to transform himself into a more menacing form befitting the Demon King.[29]

Edens Zero (エデンズ・ゼロ, Edenzu Zero?): A large spaceship owned by Ziggy before giving it to Elsie Crimson so she can pass it on to Shiki.[30]

Edens One ( , Edenzu Wan?): A large spaceship he created to be the successor of the Edens Zero.[16]

Retrieved from "https://edenszero.fandom.com/wiki/Ziggy?oldid=31291"
Community content is available under CC-BY-SA unless otherwise noted.