Chapter 31 (Jamilov)
Chapter 39 (Spider)
Spider (スパイダー Supaidā) was an infamous hacker renowned in the Sakura Cosmos. His avatar in Digitalis is named Jamilov (ジャミロフ Jamirofu), a murderous player in Digitalis. He was also affiliated with Drakken Joe of the Oración Seis Galáctica.[1]

In Digitalis, his avatar is that of a tall thin man. He has got a long pointy nose and elfish ears. Half of his slim face looks like it's cracked and he has some armor-like metal, covering his large and spiky chin. He got sharp teeth, dark lipstick and piercings. He wears dark clothes and carries around a scythe used for murdering people.[2]

Outside of Digitalis in reality, Spider is a thin, unkempt man with greasy shoulder-length dark hair, large glasses with an "X" design over them, he has a large nose with black heads on it, and large lips. He wears a dark turtleneck with a set of jeans, a pair of white socks with one having a large hole where the big toe is and when outside his ship, he wears a pair of simple sneakers. 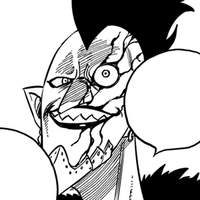 Spider as "Jamilov" up close

Spider has the typical personality of the "Creepy internet shut-in". He spends too much time on a computer and collecting things, overvalues his hacking abilities, and is described as "very creepy" by women. Beneath it all, Spider is jerk who uses and abuses his abilities with computers at the expense of others and to top it off, is a sore loser.

Spider also displays a laundry list of character flaws: He views himself as a valued associate to Drakken Joe and uses this to make others fear him. However, it's revealed that Drakken doesn't even seem to know him showcasing that despite his intelligence, he's also not too bright.

In Game, his Avatar "Jamilov" is a murdering, womanizing, cheating psychopath who is, once again, a sore-loser.

Spider has a unique laugh, being "Byahahaha."[3]

Rebecca states that while she knows little about Spider's history, she is well aware that he is a hacking legend and a member of a crime syndicate. Spider is also known for making 10 billion Glee from hacking.[4]

At some point in his life, Spider fixed Drakken Joe's computer. Drakken then told him that from this moment on, they would be brothers.[5]

Spider appears and threatens an NPC claiming that he can kill the latter due to being a 'chosen player'.[6] He later appears to Shiki, Rebecca, Pino, Weisz and Homura, after killing a female NPC in Crysta.[7] He then proceeds to tell them how much he loves to kill players, and even shows them some of the players that he's currently killing.[8] He then introduces himself as Jamilov, the Chosen Player and informs the group that he is a colleague of Drakken Joe, one of the infamous Oración Seis Galactica.[9] This culminates into a battle that he leaves due to Drakken contacting him. Upon his return to the game, he meets "Homura" and plans an attack with her.

When the attack begins, the real Homura Kōgetsu intervenes and Jamilov loses his patience and goes crazy on the NPCs revealing he uses cheat codes to make himself unstoppable. Here, Hermit finally becomes annoyed and uses Weisz's account to use cheats herself on Shiki to prove herself the superior hacker to Jamilov resulting in his defeat.

Humiliated, Spider hacks into Edens Zero and begins to destroy the ship; snidely believing he was unstoppable with his abilities and untouchable thanks to his partnership with Drakken Joe. Hermit however, once again, outwits him after some soul searching from Shiki and his friends and tricks Spider into thinking he was being killed with the guns of Edens Zero in retaliation except they were fireworks, causing him to pass out and wet himself.

Further humiliated, Spider goes to Belial Gore and inform Drakken Joe of his recent humiliations by the Edens Zero crew only to be warned by Maria that he's busy and not in the mood but doesn't stop him from barging in on Drakken who appears to not only have no idea who Spider is, but also very angry.[10] Spider stumbled into the middle of Drakken's loan business as the Dark Alchemist was torturing the victim Murray Morrison for not paying his unreasonable loan on time.[11] Diego calls him "Tick" when trying to recall his name from the tech division much to the hacker's dismay.[5] Spider tries to cheer for Drakken to kill Murray Morrison but is silenced when the Dark Alchemist says that it's no good to kill the man if he's not alive to repay what he owed to him.[12]

After the torture was done, Spider then told Drakken Joe at his office with his ordeal with Edens Zero and how he suffered from them in defeat. Drakken was angered on how Spider was defeated and stained his reputation by using his name that he ordered Seth to kill him on spot.[13]

In his last moments, Spider did not notice that he's already dead by the time Seth quickly drew his gun and headshot him almost immediately.[14]

Programming Skills: Spider is shown to be a skilled programmer as to have the ability to hack into the coding for Digitalis and cheat throughout the game by hacking into other player's accounts and giving himself infinite health, being able to brainwash NPCs, kill NPCs and not receive a ban as a result.

Maria: Spider has a scythe in Digitalis named Maria used for killing countless people.[15] The blade has the ability to change into a dark creature made of black mass.[16]

Retrieved from "https://edenszero.fandom.com/wiki/Spider?oldid=30512"
Community content is available under CC-BY-SA unless otherwise noted.