Edit
watch 01:55
Cobra Kai Season 4 - The Loop
Do you like this video?
Play Sound

Homura Kōgetsu (ホムラ・コウゲツ Homura Kōgetsu), also known as "Valkyrie Homura" (ヴァルキリー ホムラ Varukirī Homura) in her master's honor,[2] is a swordswoman from the Planet Oedo. She is a member of the Crew of Edens. She is also the student of the late Valkyrie Yuna,[3] formerly one of the Four Shining Stars, and eventually becomes her successor as the new "Sword of Edens".[4]

Homura is a slim young woman with dark-brown eyes, long, navy blue hair, and a beauty mark located under her left eye. Her hair reaches to her waist and part of it is tied in a high ponytail with a yellow ribbon. She is very well-endowed and has a curvaceous figure.

Homura's main outfit consists of a sleeveless, yellow-colored kimono with red-colored flower-like designs, loose sleeves around her forearms, a fitted leotard under her kimono, and knee-length black stockings with sandals.[5] In the anime, its pattern is less intricate.[6]

Homura's outfit while in Digitalis is a shoulder-less, light-colored kimono with semi-circular flower designs, black square-shaped trimmings on the end of the sleeves, and a flower-like clip on the right side of her head.[7]

While on the planet Mildian, Homura changes into a medium-length kimono that resembles her primary outfit but comes with a pair of red-colored bunny ears, a Yamato design, a bold low necktie, a white fluffy tail, fishnet stockings and has a pair of zori sandals.[8]

After leaving Sun Jewel, Homura now wears a kimono similar to her initial attire, but now has red cloud-based designs with a light-colored rose on her hip, a navy-blue hakama with white trimming on the bottoms, and a pair of knee-length black boots.[9] In World No. 31, Homura used Weisz's app to change into a decorative light-red kimono similar to her main outfit, but revealing most of her ample bust, and her hair is tied in a long ponytail by a matching knot-top shaped like fox ears. 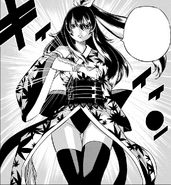 Homura in the manga

Homura in the anime

Homura appears to be a calm individual who desires to help anyone without any reason. She has a tendency to voice her thoughts out aloud, even when she intends to keep them a secret. She also has an interest in fighting the Demon King and has a love for fighting strong opponents.[10]

She is capable of anger and aggression as she showed both upon seeing a replica of her master and one of the Four Shining Stars', Valkyrie Yuna as her opponent in Xiaomei's arena within the Temple of Knowledge.

Homura is shown to be unable to handle hot temperatures and often sweats easily.

Homura was born on the planet Oedo where she lived with her mother until the day she was abandoned by her. She was eventually taken in by one of the Four Shining Stars' Valkyrie Yuna and became her disciple after Valkyrie rescued her from some thugs who intended to take her to Guilst and sell her. Valkyrie trained Homura in the art of swordsmanship using the Ether Gear Soul Blade. Valkyrie also told her about Edens Zero and its captain, the Demon King. At some point, Valkyrie disappeared, leading Homura to go on a journey to find her.

When Shiki decides to head to Edens Zero, Homura is seen at the Guild, acknowledging the name. She then requests Weisz to bring her aboard the ship in exchange for her help in rescuing the captured B-cubers. Weisz allows her to join on the condition that she has to wear the clothes that he will pick out for her.[11] Later, when the Edens Zero is about to leave to Planet Guilst, Homura and Weisz met up with Shiki, Pino, and Witch and subsequently introduces herself before informing them that she possesses Ether Gear.

Once the Edens Zero arrives at Planet Guilst, Homura, Shiki, and Weisz head to the streets to find the mercenary squad Rogue Out which Jinn is affiliated with. The group reaches a church that appears to be the squad's headquarters and encounters its leader, Sister. When one of Rogue Out's soldiers launches a heat-seeking missile at Shiki, she bisects it with an energy blade.

Homura joins Rebecca and Happy in the Spa of Eden, where she sits in the middle but is bothered by the heat. Rebecca asks if she is alright, which Homura answers that enduring the heat is part of her training. She then asks Rebecca if she is a wielder of Ether Gear and believes that she is using it to endure the hot water, only to be told that it is not. She is surprised to hear from that frequent soaking in the bath will grant people the usage of Ether Gear and spouts out her suspicion that Rebecca is training as well. Homura then asks Rebecca what powers does she want and explains that if she has not yet learned then it is possible. She is confused when Rebecca mentions guns, but is surprised when Happy turns into a pair of guns and challenges them to a duel, creating two swords. When Rebecca questions of doing it there, Homura asks if it would pose a problem, which Rebecca points the ridiculousness.[12] After bathing, she gets a massage from Witch, who offers her more types of massages, including a mind-numbing torture & pleasure massage. Intrigued by that one, Homura is given a session of it, which she proclaims is part of her training and is left behind to recurperate.[11]

When Homura enters Digitalis through virtual reality, she arrives in a jail cell. Amira, an agent of the Galactic Intelligence Agency, is the culprit who captured her and impersonates her with a handsome prince persona to pass off as one of Homura's quirks to Shiki and his friends, so she can complete her mission. Homura states that she spent one day to escape and another to gather information only to discover Amira impersonating her.[13]

She arrives in time to save Shiki and the NPCs of Digitalis from Jamilov's forces and chases after Amira who tries to escape upon realizing her plan has failed and reveals herself to Homura, accidentally revealing her identity as a GIA agent due to some of the former's personality still being inside of her and attempts to silence Homura by shooting her, only for the swordswoman to deflect it back and forcing her to log out, she then returns to the others with the troll monster before logging out with the others.

During Spider's attack on Edens Zero, Homura helps the others reach out to the heartbroken Hermit by explaining how Valkyrie Yuna, an android, was her teacher and mocks the humiliated hacker along with the others when Hermit activates the fireworks system, lying about it being a weapon.

After escaping the giant fish in the Poseidon Nero Sector, she marvels with the others at the sight of the Aoi Cosmos outside their windows, calling it a curious spectacle.[14] They soon arrive at the Fire Planet Red Cave, but are confused by the sight of an ocean.[15]

Soul Blade (ソウルブレイド Sōru Bureido): By using Ether Gear, Homura has the ability to create and wield a variety of bladed weapons, mainly swords, made of Ether. Inherited from Valkyrie, Homura had stated to have been honing this type of Ether Gear during childhood in order to challenge and defeat the Demon King.[16]

Overdrive (オーバードライブ Ōbādoraibu): During her battle with Milani Lucra, Homura is shown to be able to access this transformation by using her Soul Blade throughout her entire body, giving her an appearance similar to that of a fox. Her hair becomes a lighter color with a pair of fox-like ears at the top and gains a large, bushy tail. Both her legs become darkened and gain light-colored Ether markings, while her arms are covered in more intricate patterned Ether Gear markings. Her outfit changes into that of a fur-collared, decorative light-colored kimono with a pair of fur-collared sleeves with dark-colored shades and ether markings, matching those on her legs, and are shaped like flame clouds, and held by a dark-colored obi tied by a pair of strings with a sakura flower on it. While in Overdrive, her Ether swords change into oriental longswords that are powerful enough to create massive explosions at once.[29]

Master Swordsmanship Specialist: Described as a type of knight or samurai, Homura is a powerful swordswoman who uses swordplay in conjunction with her Ether Gear. She can easily bisect a heat-seeking missile and defeat a large group of armed soldiers by herself with only her sword and the speed of her attacks. While in Digitalis, Homura demonstrated the ability to use her sword to easily deflect a high-speed bullet back towards Amira.[30]

Enhanced Speed: Homura possesses a high degree of speed, enabling her to attack at high speeds. When using Ether Gear, her speed is further increased. Homura managed to intercepted and cut a rocket before hitting Shiki,[31] and attack multiple Rogue Out Soldiers before to even react.[32]

Enhanced Reflexes: Homura is shown to have incredibly fast reflexes, making her capable of easily dodging opponents and flying bullets with ease. It can also cut a barrage of arrows,[33] and deflect bullets easily.[34]

Riding Skills: Homura has shown the ability to ride a "horse" such as the Turn-to-Timonium.

Enhanced Hearing: Homura possesses a high amount of hearing. Was able to pinpoint and locate where Milani was in her mirror world just by using her hearing.[36]

Ether Sense: After the battle with Mora, Homura acquired the ability to can sense Ether of people. Homura was able to sense Ether of Beast Squad 1, from very far away.[37]

Aquatic Adaptation Lacrima (水中適合の, Suichū Tekigō no Rakurima?): During her stay on Red Cave, Homura wore one of these devices which allowed her to breathe and communicate underwater without any issues.[38]