Chapter 2 (unknowingly)[1]
Chapter 64 (Leaper)
Chapter 84 (Cat Leaper)
Cat Leaper (キャットリーパー, Kyatto Rīpā?), known simply as Leaper (リーパー, Rīpā?) in its pre-awakened state, is an Ether Gear that enhances the user's ability to leap by focusing their Ether into their feet.

Described as the "power of possibility" by Xiaomei,[2] as well as the forbidden power to change the laws of the cosmos according to Drakken Joe,[3] Cat Leaper drastically improves the user's jumping ability, giving them great speed and agility.[4][5]The user can become so fast that they leave behind afterimages to confuse or misled opponents.[6] However, its true power allows the user to potentially change the outcome of past events by rewinding time.[7] When this power is in effect, the user gains catlike ears and a tail, true to its namesake.[8]

While Rebecca has unconsciously used Cat Leaper several times in the past - with it even activating if she loses her life[1] - she only recently became aware of its true power after being captured and confined by Drakken Joe for 7 days. Until then, when she used it in the past, she had no recollection of the previous timelines.

As a side effect of its activation, whatever shoes or boots Rebecca is wearing are destroyed due to the release of energy, leaving her barefoot.[9] 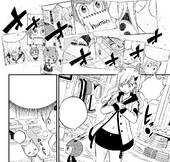 Retrieved from "https://edenszero.fandom.com/wiki/Cat_Leaper?oldid=27651"
Community content is available under CC-BY-SA unless otherwise noted.